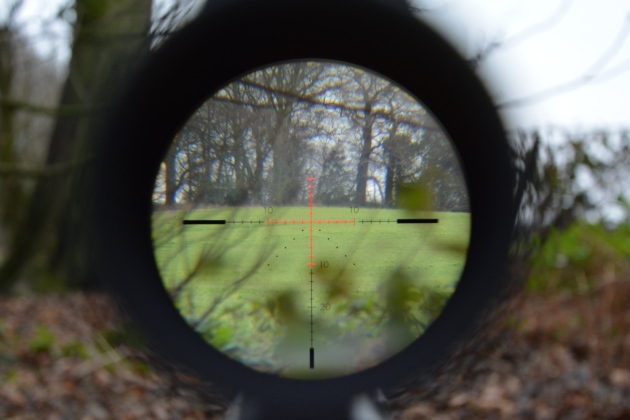 Trijicon was always a name that stirred up images of specific military optics like the ACOG (Advanced Combat Optical Gunsight) and VCOG (Variable Combat Optical Gunsight). Reflex sights and MRO (Miniature Rifle Optic) units suit the faster fire and moving-target rifle game, but in terms of familiar sporting use it’s been easy to overlook the AccuRange and AccuPower, the latter of which is on test here this month.

The specification of my own first high-end optic was 4-16×50, so it’s a magnification range I’m familiar with and very much warmed to. I like the field of view at 4x with the longer range precision for varminting, and steel plates at 16x. Set-up at 6-8x 80% of the time is ideal for walking and stalking use; 4x is a little too much for moving and driven targets for me, but that’s not really the intention of this scope anyway. ‘Made in Japan’ carries a cachet of quality and price from the start, with all fit and finish on the scope absolutely first rate (no unsightly gaps remain for dirt and debris to leach into, mixing with water to make a grinding paste). The one-piece 6061-T6 tube is hard anodised matt of slightly rougher texture. It is the type of finish that shows the handling marks of hands and fingertips where the skin rubs, and this shows in the photos. It wipes clean with an oily cloth but I do prefer it smoother to start with.

Elevation and windage control dials sit beneath knurled caps on a modestly proportioned spherical saddle that leaves lots of 30mm tube space free for scope mounting. The caps spin off, and back on, fluidly with no hint of likely cross-threading and the dials below are marked in ¼ Minute Of Angle (MOA) clicks. These correspond to approximately ¼” at 100 yards (1 MOA is precisely 1.047” at 100 yards).

At 27mm in diameter and 11mm in height, there is enough to get a decent hold, with or without gloves, and 18 MOA available per complete rotation. The clicks are audible and tactile, with the upper dial lifting to disengage it internally, allowing you to float and spin it to ‘0’ after you have set primary zero for your rifle. I liked the design, especially the feel in operation, and found all adjustments to be more accurate than I could ask them to be. A box test was performed with ease on an accurate .223 rifle. It sounds petty, but the way a dial cap spins on and off its threads, the quality of the machining on the aluminium, and the feel of this component tells me a lot of the overall care with which a scope has been made – it rarely lies! The Trijicon was slick. Lack of a taller target turret would indicate it was not specifically a ‘dialling scope’ for long ranges, but I would have no concern at all using it for such a task with 80 MOA available from just over four turns. There is no turn indicator or return to zero other than the visual marker, but if you go beyond 18 MOA from zero then it’s likely to be on targets anyway, and you have plenty of chance to make a mental or written note without getting lost in rotations.

The left-side parallax dial runs from 10 yards to infinity and gives a sharp picture with decent control and no undue feeling of backlash. There was certainly no feel or noise from the internal lens packages shunting back and forth on their helix. Magnification control from the similarly knurled ring in front of the ocular is equally grippy, with a refined feel on the machined knurling. It has an external wing sitting vertically when set to 8x so you know exactly where things are in the dark (especially with a second focal plane reticle, because at 16x this wing is all the way clockwise). A fast-focus eyepiece at the rear of the ocular body enables a crisp reticle picture to be found, and it’s 1.5mm smaller in diameter than the outer body, so easy to add a Butler Creek or other such cap to. It’s also unobtrusive for mounting rear night-vision accessories – just be aware that the entire ocular body shows a slight taper in profile from the zoom ring backwards. There is a 28mm gap before the topside illumination rheostat control running from 1-11, with ‘off’ staged in between the firm detents. Nothing is likely to get nudged. There is no auto ‘off’ for either cant or vertical elevation of the whole scope, so make sure you shut it down after use.

This illuminated reticle is available in green as well as the red one shown here. The MOA version here shows three fine-etched arms spreading from the centre, with cross-hatched markings every 2 MOA up to 10, then out to 20 on the side wings, and 30 below where broader bars emerge. These hatchings are only 2 MOA at 16x because a second focal plane reticle remains constant in size, regardless of magnification. If you were to use it at 8x, each cross-hatch would represent 4 MOA and at 4x, they would subtend to 8 MOA between each pair. This is where a first focal plane reticle differs – you can read off or aim off the precise values regardless of chosen magnification. One thing I will say for Trijicon is that I like the fact that this 2fp reticle reads at full magnification; all you have to do is wind the dial all the way to its stop and you know everything is correct without doubt in any light condition, unlike scopes that mil or MOA at intermediate magnification adjacent to a visual marker, which is useless without external light. Dots are also present in similar 2 MOA increments for windage and elevation. These spread diagonally into the lower left and right quadrants. I’m not personally a huge fan of dots as they are either invisible to my eyes against the background, or confused with bullet holes on paper, but each to their own. Only the centre 10 MOA illuminates with a vertical bar rising ‘10’ up from the centre too. Even illuminated to 11, no glare distracts or dazzles with internal reflections within the tube. Brightness will diminish all the way down to ‘1’ for minute illumination in very low light, but I rarely ventured below ‘6’.

Although not made in the US, scopes that seem tied to their market seem to get a bit long in eye relief, and on an optic that is higher magnification, and consequently more likely to be used in a precision role, I liked the 90-95mm eye relief. It sounds unimportant, but on smaller rifles with shorter stocks the 100mm ones can be just that bit too long, and when you are prone for a shot your eye is just getting too close for full image perception. You can learn to handle recoil, but you can’t lengthen a gun’s action for scope mounting, or ‘wind your neck in’ when prone. The image was flat edge-to-edge with a sharp, bright picture and no noticeable strain felt from my eyes in any conditions, with the exit pupil and eye box both easily found. Colours were perhaps not quite as ‘warm’ as some optics, but multiple layers of coatings are usually balanced for whatever green/blue spectra is predicted to be preferred by the user, and nobody’s eyes are the same anyway. I certainly had no problems picking out detail and aiming with precision from the relatively fine, yet still distinctive reticle. No unwanted dazzle or reflection was perceived when shooting with low winter sun that always seems to want to glare directly at you, and I wasn’t troubled by any chromatic aberration, which seems to accompany sun coming in at this angle, either.

Trijicon is a quality Japanese scope and I will no longer be thinking of them just as a military designer and manufacturer. I’d like to look at the Reflex designs for driven shooting because manufacturing quality feels excellent as well as understated looks